​“Do you believe in Faeries? I do, I have held one in the palm of my hand.  It’s funny, but people go their whole lives not noticing other worlds existing within our own but when they become real, life is never the same again. Faeries are not just winged pretty things you see in picture books, all magical beings and creatures are considered part of the Faerie world and they exist everywhere. They are wild, complicated and dark, but I must warn you, once you have seen them, they notice you too...”  - Rose Montgomery-Diaz
​Rose Montgomery - Diaz was never a conventional girl. To begin with she lived in converted Victorian theatre. She liked to wear costume pieces salvaged from wax dummies that could be found under the Theatre stage, and she knew that Faeries existed.


The day Rose saves a tiny mermaid her life is changed forever. Not only does she discover that faeries and mythical creatures do exist, but that very same night her parents disappear. Left under the guardianship of her unconventional grandfather, Rose is sent to boarding school. Five years later, when Rose is expelled for sneaking out of bounds at night, Rose returns to the town where it all began to start afresh at a local school. Within days of her return, the faeries begin to gather around Rose and along with her new friends, Thomas Parish and Owen Finch, she sets out on an adventure to free Kallan, a Faerie King of the Unseelie court and repair the delicate weave of the faerie world. As one mystery unravels, other secrets come to light. Rose learns that her family has had dealings with the Faeries for a long time and that her father’s colleague, Mr. Dietrich, knows more than he pretends. Convinced that there is some sort of link between her parent’s disappearance and the unveiling of the mythical world, Rose becomes obsessed with helping Kallan in the hope of uncovering the truth; but this alliance just might change her in ways she never thought possible...
​  Book 2.   The Changeling Riddle

What is the mystery illness striking young girls in town? Rose is the only one who knows. Her binding with Kallan, the King of the Unseelie Court, whom she saved from imprisonment has given Rose faerie sight and gives her the ability to see that the ill girls are actually changelings, objects made to look like girls through the use of faerie magic. The real girls of the town are being kidnapped by Argate, Queen of the Seelie Court. It is up to Rose and her friends, Thomas Parish and Owen Finch, with the help of Phooka, her guardian, to find the girls and rescue them. Little do they know that Argate is trying to trap Rose who resembles Arathusa, Argate’s sister whose ill-fated love for Kallan resulted in her death. Rose must learn to control her powers under the instruction of Kallan, and, in doing so, understand her dual nature - is she human or faerie? The mysterious antique store owner Mr. Deitrich has a grand scheme of his own, to open the passage to Avalon, he gives Rose a picture of her long lost aunt  causing a rift between her and her grandfather – why would he lie to her? The final challenge is to outwit the Keeper who is holding the town girls until Beltane’s eve when they will become part of the Seelie court forever. Only by solving his riddle will the girls be set free. 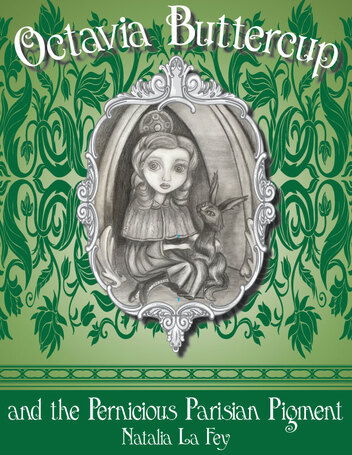 ​A Selkie by the Docks? A Fireman and his son who don’t burn? A dockworker's daughter who is an extraordinary psychic? Fabulous hats? And a secret society that calls themselves the MAGIS?( Masters of Alchemy, Geomancy and Illuminating Sciences) This is the world of Octavia Buttercup, where faerie and human blood are mixed and magic is everywhere, Octavia Buttercup just doesn't know it yet...
​
Octavia Buttercup lives with her mother above a hat shop in a steampunk type London. She is the daughter of an Earl. After her father’s death, the family has fallen on hard times; the new Earl of Buttercup has made outrageous demands for Octavia’s future. To avoid financial ruin, Octavia’s mother, the Dowager Countess of Buttercup, was clever and resourceful enough to open the hat shop that is frequented by many ladies of high society who believe their treatment to be “disgraceful”. Octavia is a creative girl and helps with the designs of the many hairpieces, fascinators, and hats during the day. She learns her lessons in the evenings after working in the shop. Although she and her mother are no longer wealthy, Octavia’s life is quite full of charm and she does not miss living in the opulence and grandeur of the Buttercup estate (not that she remembers it). If you asked Octavia what she thought of high society she would tell you it was a load of “pish posh”.
Her life is changed when she meets a faerie and helps him save other captive faeries and discovers that there are fairies and part faeries living amongst ordinary people.

​This series is currently unpublished and looking for an agent. The cover is a mock up.
​
Book 1 –  Octavia Buttercup and the Pernicious Parisian Pigment

A plot of poisonous Tarot cards, captive faeries and a secret society called the Masters of Alchemy, Geomancy and Illuminating Sciences.
​
Book 2 – Octavia Buttercup and the Curious Carnival of Cruelty